Home / News / The Way of St. James and the Erasmus program, winners of the 15th edition of Xavier Tourism Awards-HTSI /

The Way of St. James and the Erasmus university mobility program are the winners of the Xavier Tourism Awards-HTSI in their 15th Edition. The awards were given at a ceremony held today in the Hotel Sofía in Barcelona.

Each year, the School of Tourism and Hospitality Management Sant Ignasi (HTSI), part of Ramon Llull University, gives out the Xavier Tourism Awards-HTSI in recognition of careers with high levels of excellence, dedication, innovation and social contribution in the area of tourism. It does so in an academic and a professional category. The awards take their name from St. Francis Xavier, patron saint of tourism.

Federico Mayor Zaragoza, former Spanish Minister of Education and Science and former President of UNESCO, presided over the event as the representative of the jury that selected the winners at a meeting held on September 20 at HTSI. Other participants included Josep Maria Garrell, Rector of Ramon Llull University; Carlos Losada, General Director of UNIJES-Jesuit Universities; Eugeni Gay, President of the Xavier Foundation, and Ricard Santomà, Dean of the School of Tourism and Hospitality Management St. Ignasi.

The Way of St. James, the first European Cultural Route and a World Heritage Site, was awarded the Xavier Tourism Award-HTSI in the professional category for its long history of developing humanized tourism based on hospitality. From its creation in 1991 to the present, the Xacobeo has helped to boost, promote and add value to the different Ways of St. James and Jacobean culture, with the end goal of promoting the sociocultural and socioeconomic promotion of large areas of Galicia.

In the academic category, the Xavier Award-HTSI was given to the Erasmus program (celebrating its 30th anniversary this year) for its promotion of European integration, exchange between peoples, knowledge of the culture of other countries, diversity, cooperation, tolerance, openness, education and globalization, among other notable and positive values associated with tourism. Over 4 million young people have enjoyed the opportunity to undergo a period of formation in universities across Europe, with the goal of improving the quality and strengthening the European dimension of higher education while promoting transnational cooperation among universities.

A JURY MADE UP OF PRESTIGIOUS INDIVIDUALS

The jury of the Xavier Tourism Awards-HTSI, which selected the winners unanimously, is made up of 14 prestigious individuals: 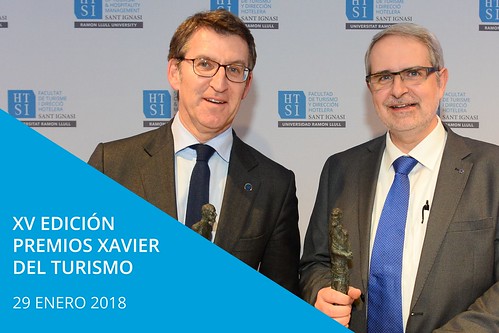 Back to the list
Previous news Next news
Request information

If you want to request information you can fill this form. One of our advisors will contact you in order to solve your doubts and offer you all the information that you need.

Find out more or adjust your settings.

This website uses cookies so that we can provide you with the best user experience possible. Cookie information is stored in your browser and performs functions such as recognising you when you return to our website and helping our team to understand which sections of the website you find most interesting and useful.

Strictly Necessary Cookie should be enabled at all times so that we can save your preferences for cookie settings.

If you disable this cookie, we will not be able to save your preferences. This means that every time you visit this website you will need to enable or disable cookies again.

We collaborate with the following partners:

Please enable Strictly Necessary Cookies first so that we can save your preferences!